As I posted earlier, I’ve been asked to write the Foreword to “Reiten Wir!” —  an anthology of new short stories based on Karl May characters to be published in October as part of events and initiatives this year marking May’s 175th birthday.

My first exposure to the Imaginary Wild West in Europe (and Karl May) dates back to 1966, when my family spent the summer in Prague — my father was leading an archaeological dig in the village of Bylany, near Kutna Hora, east of Prague.

In preparation for writing my Foreword, I dug out the diary I kept that summer — and where I noted the Czech fascination with Winnetou and the Wild West.

“Cowboys 7 Indians are BIG. Esp. the W. German (I think) movies Winnetou and Old Shatterhand. In almost every store window you see color postcards &/or slides with scenes from the films being sold [;] I have seen Winnetou candy bars, books, a poster in a record store for the Winnetou music etc. W. is apparently the solemn-faced ‘Indian’ (typically clthed) who looks like either Sal Mineo or Paul Newman (or both). Shirts, brown with fake buckskin fringe & laced neck are advertised as ARIZONA, & next to them re TEXAS blue jeans….[…] More Winnetou junk: iron on patches, special blue jeans, new cards, packs of cards of the actor who plays Winnetou. Magazine cover…”

Later in the summer, I watched Winnetou, the movie, on television.

“It was a pretty bad movie but interesting for a couple things. The cast was international. Herbert Lom was the baddie & Lex Barker Old Shatterhand. These two are US I think. Pierre Brice (French) was Winnetou. Then there were British & others. I think it was filmed in Yugoslavia. I don’t know in what language — it was dubbed in Czech. This was the first time [in a movie] I ever hear an Indian (Winnetou) who didn’t have a deep voice. He was high & thin & nasal. Also, the Indians were goodies.”

Scene from a Karl May festival performance in Rathen, Germany

That summer, our family went to a live performance of the operetta “Rose Marie” (of “Indian Love Call” fame), set in the Canadian west. It starred the pop singer Waldemar Matuska who, I wrote “is a big star here. His pictures are in the shop windows and magazines & record stores almost as much as Winnetou.”

I decided that Matuska would be my favorite singer and bought a picture postcard of him (which I still have) to go with the ones I bought of the French actor, Pierre Brice, who played Winnetou in the movies.

Many years later, when I first started seriously researching the Imaginary Wild West and the European country music scene, I met Matuska, who was headlining of the first Czech country festivals I attended (in around 2004). 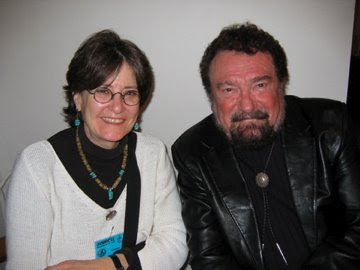 At the Strakonice festival, 2004

Matuska, who had moved to the United States in the 1980s, died in 2009. I wrote at the time on my Sauerkraut Cowboys blog:

Matuska was a towering figure in Czech popular music and culture and was instrumental in popularizing American folk and country music to the Czech audience. (Singing, as was required under communism, Czech lyrics to American songs.) He also appeared in the seminal 1964 movie “Limonady Joe” — a wonderful send-up of the singing cowboy genre of movies and a classic of Czech cinema.

Matuska was important to me in my connection with Eastern Europe, and in my feel for the music and popular culture of the Czech Republic in particular. He became my idol when, as a kid, I spent the summer in Prague with my family in the 1960s. I bought picture postcards of him — he was lean, bearded and extremely handsome. And I convinced my entire family to go hear him at a rather weird performance of “Rosemarie” at a sort of indoor sports arena…Matuska played the role of the mountie that was taken by Nelson Eddy in the classic movie. I remember that it was a rather static performance, as they all seemed to sing to the microphones that were hanging prominently above the stage…

When I actually met Matuska decades later, at the Strakonice Jamboree folk and bluegrass festival in the Czech Republic in 2004, it was a remarkably emotional experience. I had just begun following the European country scene, and Strakonice was my first Czech festival. And there he was — the idol of my youth!

Matuska — who had “defected” to the United States in 1986 but, after the fall of communism, returned frequently to CZ to tour — was the headline act. Heavier, even bloated-looking, with clearly dyed hair, he didn’t look much like the slim, handsome singer/actor of the 1960s, but he had the audience in the palm of his hand.

I went backstage and spent 20 minutes or so talking with him. I felt shy and fluttery! What I remember are his hands — very small and delicate, with polished nails and an almost dainty ring.