In late October I spent an afternoon at a country western festival in Bologna, Italy. It was the very last day of the two weekends that the festival took place, and I was eager to see what it was like: though I have been to wild west and country festivals in Germany, Austria, Switzerland, France and the Czech Republic, I have only been to a couple of them in Italy. 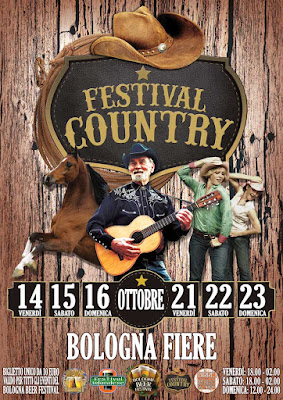 This one, called “Festival Country,” took place at the Bologna Fairgrounds, and it shared space in a cavernous hall with a sort of “October Fest” beer festival (featuring what was presented as German food). In a separate cavernous hall there was a so-called “Irish Festival:” vaguely Celtic music, and stalls that mainly seemed to sell “Lord of the Rings” type clothing….. 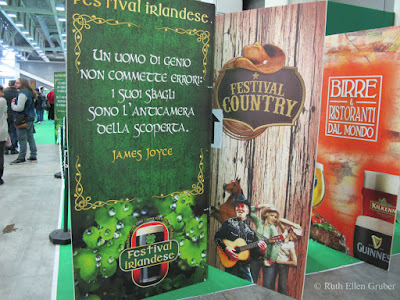 The path to all three led through the grim industrial landscape of the Fair buildings….. 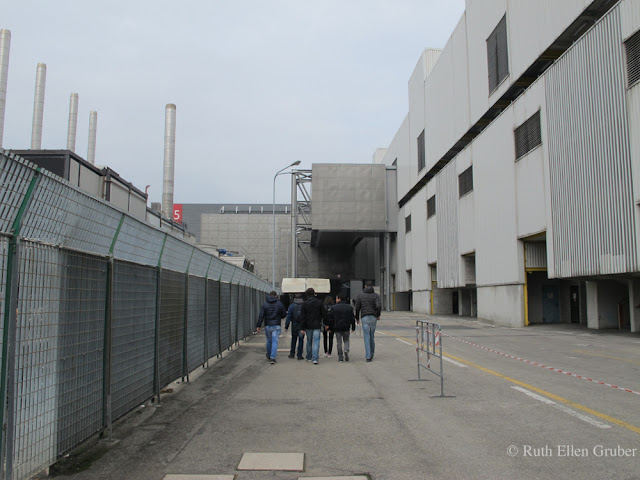 Once there, what did I find?

The scene — at least on the day I was there — was a sort of distillation of all the most common stereotypes associated with “the west,” “the frontier,” “country-western,” and, in a certain way, “America.”  It was almost “paint-by-numbers”– but refreshingly, in contrast to festivals in other countries, I only saw one Confederate flag. 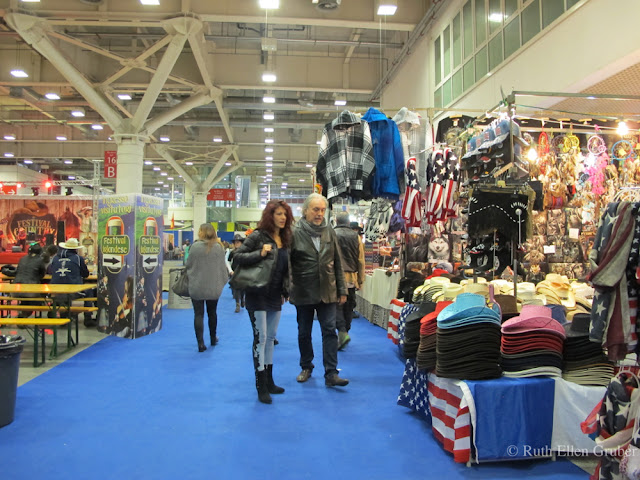 I was hit by a fist of sound as soon as a entered — from a band (whose name I didn’t get) playing on a stage in the middle of the hall: playing so loud that that the sound was utterly distorted, with only the bass and the beat discernable. 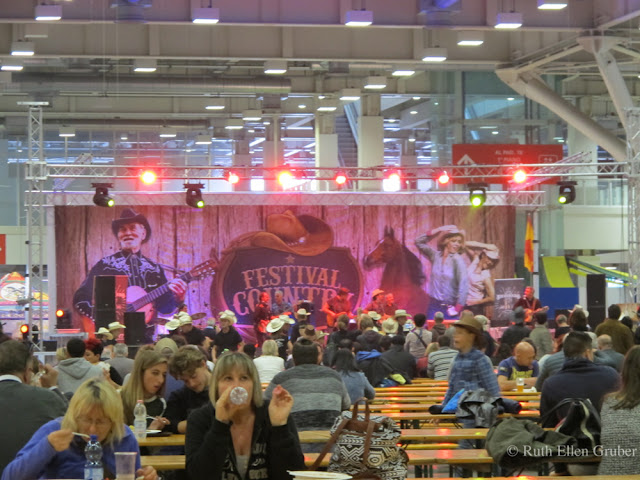 At the entrance to the cavernous hall stood a manikin of a Native American, posed outside a tepee as if to pounce. 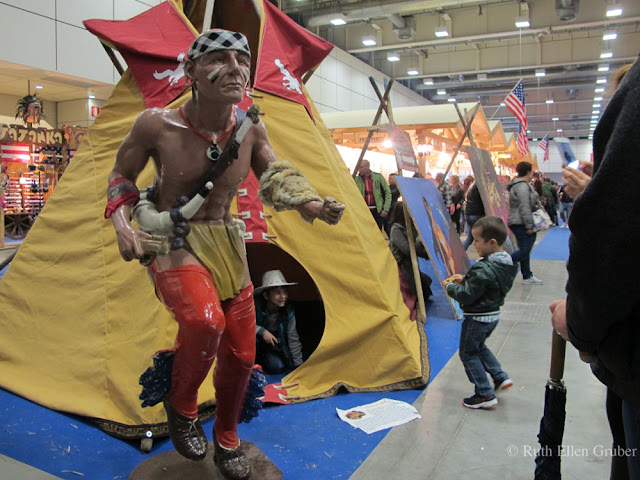 Or of course pose for pictures.

Nearby, there were basic-type mock ups of a Saloon, a bank, and a corral — which is where, I believe, shows were staged. 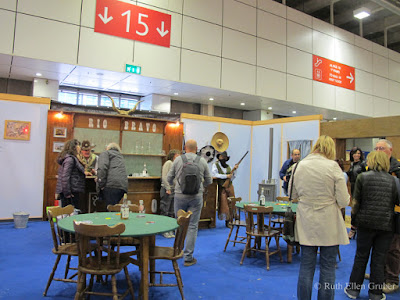 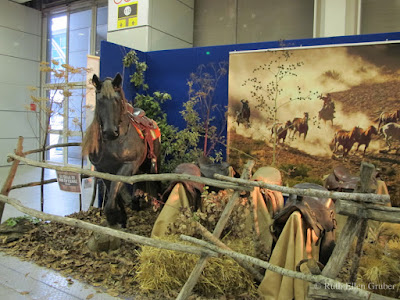 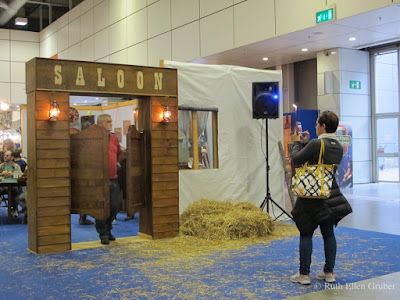 All around the edges there were stands selling cowboy boots, cowboy hats, T-shirts, “western attire” and the usual type of wild west tschotsches — most of which I rather assume were made in China or somewhere. Unlike at some other festivals I’ve been so, there was not much of the participatory or performative dress-up. 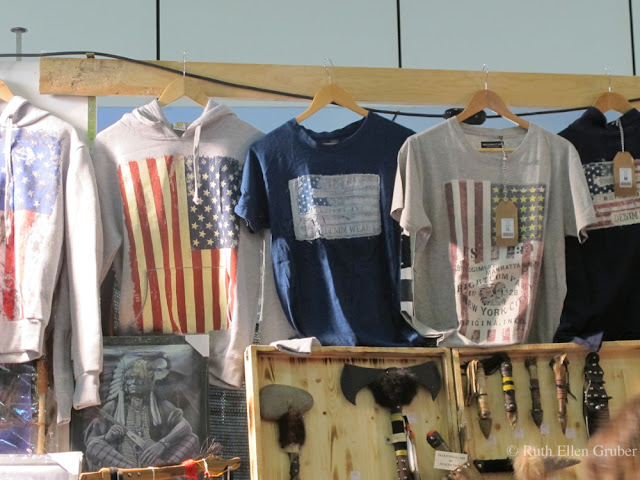 There was a dance floor for line-dancing (increasingly popular in Italy) in front of the band-stand. 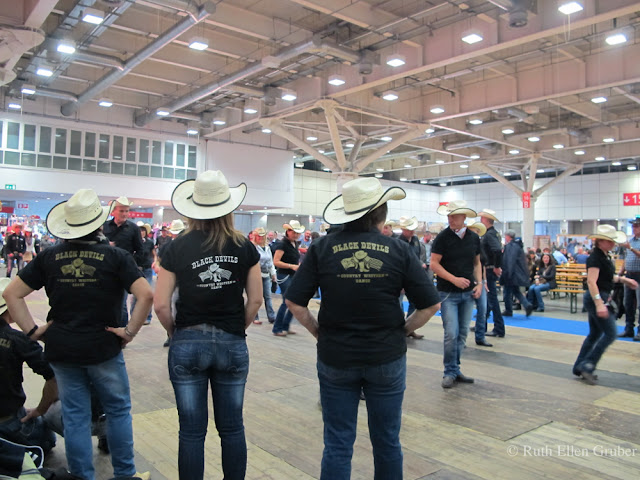 And beyond this were  lots of tables where people could eat — the “western” fare included a variety of (mainly) meats, giant hamburgers and other dishes that to me seemed pretty unappetizing (I ate fish &amp; chips in the Irish festival). This being Italy there was also pasta — but thanks to the Americanness of it all, it was the first time I have ever seen “spaghetti and meatballs” in Italy. 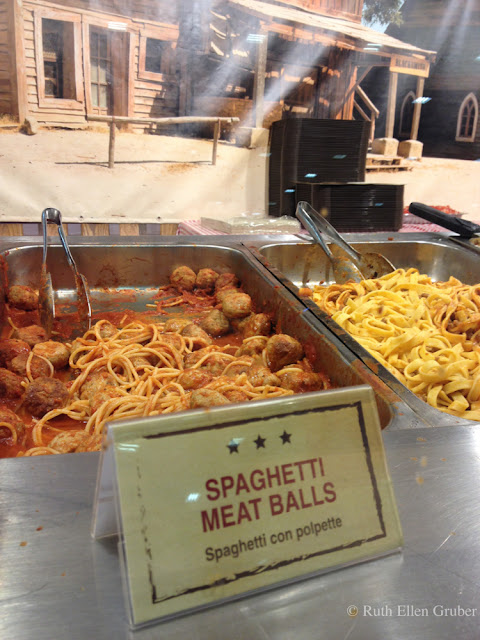 One thing that was different from some of the festivals I’ve gone to elsewhere was a series of lectures given on “western” topics, such as western movies. I dropped into one of them — where an Italian from an organization called Sentiero Rosso (Red Trail) that supports Native American rights was talking about how his group brings aid to Native American families. 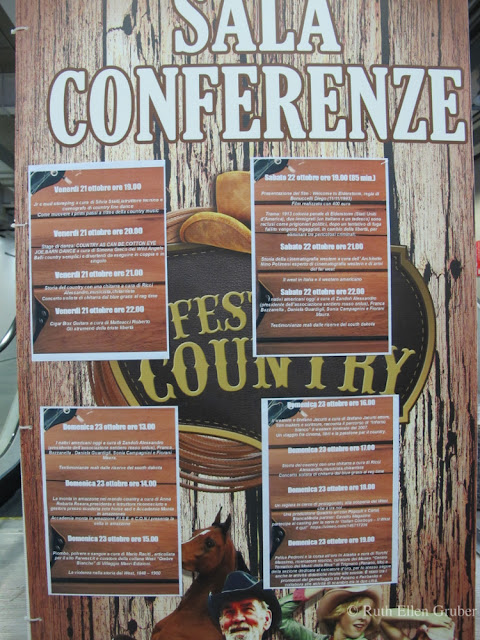 I was planning to stay at the festival until evening (the last train back to Florence was at something like 9:30 p.m.), but in fact, I only lasted a few hours….I’m sad to say that was it all so empty,  stereotyped, and  superficial — and that, despite the razzle dazzle and noise, there was such a lack of energy — that it wasn’t really fun. 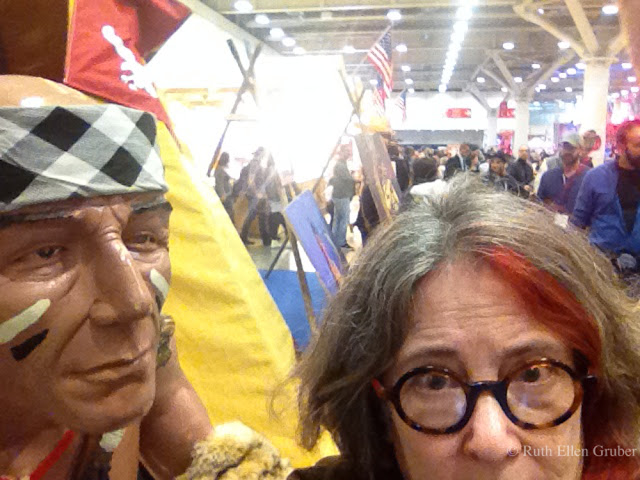