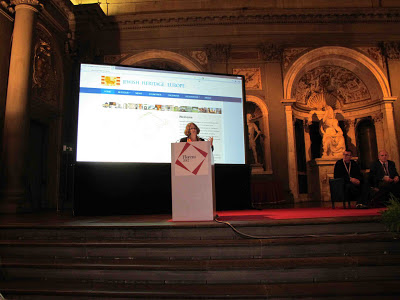 I had the pleasure and privilege Sunday of giving a presentation about the Jewish Heritage Europe web site project in Florence, in one of the city’s most prestigious and spectacular venues — the Salone dei Cinquecento of the Palazzo Vecchio, the city hall of Florence, a massive building with a distinctive tower that was originally built at the turn of the 13th and 14th centuries. 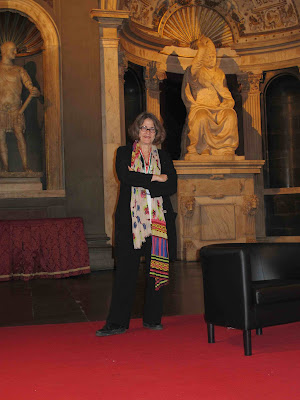 I was part of a five-person panel speaking on various aspects of “Developing Jewish Cultural Heritage in Europe.” Our round-table was part of a huge, weeklong biennale on Cultural and “Landscape” Heritage sponsored by the Fondazione Florens. Other people on the panel included Giuseppe Burschtein, an IT specialist and Jewish heritage activist in Florence; Renzo Funaro, an architect who heads the “Opera del Tempio” project of restoration and promotion of Jewish heritage in Florence and elsewhere in Tuscany; Dora Liscia Bemporad, the director of the Jewish Museum in Florence; and Annie Sacerdoti, a pioneer of Jewish heritage documentation and activism in Italy and one of the spearheads of the European Day of Jewish Culture.

The moderator of our panel was the journalist Wlodek Goldkorn — who pointed out at the start of the event that this session was probably the first time that a Jewish program (other than a commemorative event) had taken place in the magnificent hall, a grandly huge space dating from 1494, richly decorated with a gorgeous painted ceiling, sculptures and paintings from the 16th century.

View from the Podium

We had a pretty good crowd — and nobody left in the middle! Given the mix of people on our panel, presentations included both local and Europe-wide issues — and none of us had more than 10 minutes or so to speak.

For my talk, I had an internet connection projected on two immense screens. I presented Jewish Heritage Europe as a tool that is already functional, attracting 4,000-5,000 people a month. I took the audience on a tour of the site, describing both the static content for 48 countries — and also the dynamic content — the newsfeed, calendar, and the In Focus section.

I had wanted to highlight some other web sites that bring Jewish heritage online — such as Judaica Europeana and Virtual Shtetl. But, alas, there wasn’t time.

You will just have to go to all those web sites and explore!